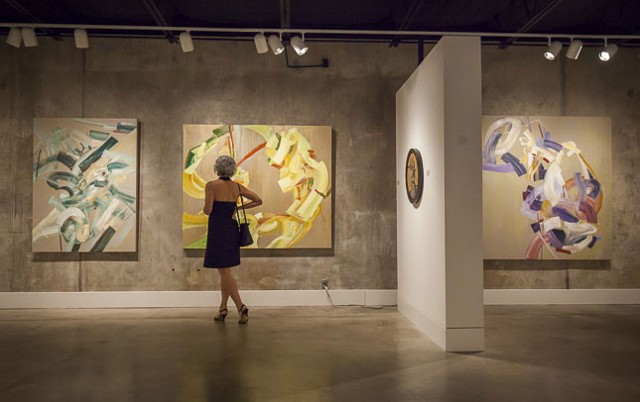 I keep returning to a beautiful quotation which has become something of a touchstone for me. The quotation is from Italo Calvino’s book, Mr. Palomar, and is a description of a flock of blackbirds flying over Rome. The narrator describes the flock as a “…moving body composed of hundreds and hundreds of bodies, detached, but together forming a single object…something…that even in fluidity achieves a formal solidity of its own.”

This idea of independent parts coalescing into a whole, only to collapse again into singular units, is one that has interested me for many years. Inherent in this idea is a sense of continuity, but a continuity constantly threatened with disintegration. It also suggests a state of suspension, where hierarchy yields to endless associations and connections.

In addition to these conceptual interests are more concrete references. Some are from the world around me: geologic formations (specifically the unstable limestone walls so common in Central Texas), pixels, and atoms. Some are artistic references, including Italian mosaic, pointillism, process painting, and pattern and decoration.

These diverse influences hold in common the theme of fragmentation. The question is whether these fragments are nostalgic reminders of a past presence, or conversely, the beginnings of a new form. The answer is never clear, which is why I remain interested in the question.